AS I trot along an unused railway track deep in the Axarquia countryside astride Deliciosa, a mixed breed Arab-English mare, I wonder whether there is anything in the world I would rather be doing.

And as our gorse-lined route leads us through the Guaro Valley – providing a fantastic opportunity for vulture and eagle spotting – I realise I have not seen a single vehicle since setting off from Periana hours before.

It is pretty incredible for the Axarquia, where sadly an estimated 22,000 illegal homes have been built since the 1990s – of which up to 8,000 are on protected land according to green group Ecologistas en Accion.

“This is probably the only road in the Axarquia with no illegal property on it at all,” jokes one of my hosts, Alain Grootaers, of Finca Don Carmelo, as we mosey along in the warm, afternoon sun.

Our route will cover around 15 to 18km throughout the day and take us from 350m to 950km – although thankfully the horses will do most of the work.

Alain, 48, from Belgium, and his Dutch wife Jakobien Huisman, 42, left behind city jobs in Antwerp three years ago to discover the idyll of rural Spain, and the horse lovers now offer an attractive range of equine treks.

Shortly after arriving I am introduced to Deliciosa – or Dee for short, who like most of Finca Don Carmelo’s horses is mixed breed. 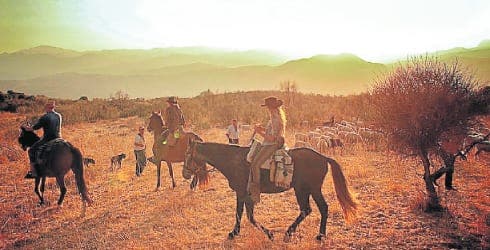 “We find pure Spanish-blooded horses a bit unpredictable, which is the last thing we want for taking out punters,” explains Jakobien, who began riding at the age of eight.

I am pleased to find Dee poised and steady, and as Jakobien informs me, can even be relied on for her steady appetite.

“She’ll stop to eat whenever she gets a chance,” she laughs.

And sure enough, just as we’re saddled up and about to set off, Dee saunters over to the nearest pile of hay and starts tucking in. 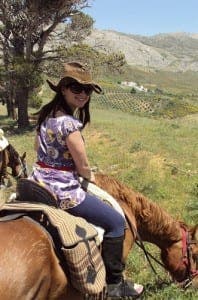 As well as Dee, the couple’s 14-strong herd also includes foals Alfarnate, Baila and Colorado, plus Jakobien’s 30-year-old mare which she brought from Belgium.

“It’s really old for a horse and it cost a fortune, but I just couldn’t bear to part with her,” she says.

Soon we are off, heading around the pretty village of Periana and through a shady olive grove.

Meanwhile I learn more about this energetic couple, who didn’t think twice about taking daughter Julia, then 11, off for a year-long trip around Asia before settling in Periana.

“People said, ‘Why are you burying yourselves in a small Andaluz village?’” says Jakobien, originally from Holland. “But we didn’t see it like that. It was simply time to do something else.”

Jakobien is a travel journalist contributing regularly to Belgium’s biggest newspaper, daily Het Laatste Nieuws, and Alain is also a prolific writer whose achievements include setting up Belgian men’s mag P-Magazine back in 1998.

As if running horse treks wasn’t enough, the pair also produce organic olive oil which is shipped back to upmarket restaurants in Belgium.

“I made a lot of contacts when I presented a cookery programme for a while,” explains Alain, originally from Belgium.

Soon we turn onto the stunning country road, which in the early 1900s housed a railway line ferrying industrial materials to and from the coast.

“You’d almost expect to see some Indians appear from over that ridge, wouldn’t you?” jokes Alain.

Once we are used to the rhythm of our carriers, Alain suggests we try a trot – and the next thing we know the horses have upped their pace, taking his animal as their lead.

Although a little unsettling at first for someone who – despite my surname – has never spent much time on a horse, I soon feel comfortable with the quicker rhythm.

Back down at walking pace, Alain and Jakobien lead us to a trough where the steeds take turns to enjoy a well-earned slurp – apart from Dee who goes straight for some wild mint.

After a downhill section, where all our stomach muscles are given a mini work-out, we grind to a halt at the village of El Canuelo for lunch. 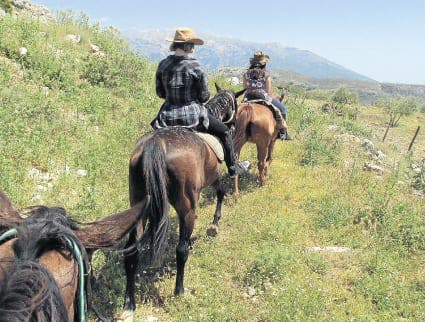 El Canuelo is a tourism complex owned by former London art dealer Edward Crawshaw, where we are spoilt with a leisurely three-course meal as we absorb breath-taking views over the lake.

“It’s wonderful that Jackie and Alain are offering these horse treks because no-one else seems to be doing it,” says Crawshaw.

And despite a jovial ambiance, we are instructed to go easy on the booze in view of the ‘drive’ back.

“We don’t want to be over the limit – the same laws apply to driving a vehicle as they do for horses, sadly!” says Alain.

Finca Don Carmelo offers a range of treks, from half-day to eight-day. Prices start at €60 per person. Over 12s only. See www.fincadoncarmelo.com

Walter Finch - 6 Dec, 2022 @ 11:30
Palma de Mallorca airport is to end the requirements for travellers to remove liquids and electronics from their bags when they pass through security...