AS I navigated the empty streets of Ecija on the hottest day in nearly 10 years, I came to sympathise with the Wicked Witch of the West from The Wizard of Oz – utterly convinced I was melting.

As soon as I set foot in Europe’s ‘frying pan’ I understood how it had gained its nickname.

With the sun seemingly inches above my head and the stagnant air lacking even a wisp of wind, the entire town transformed into an alfresco sauna.

Not even my Middle Eastern roots could prepare me for this kind of heat.

But despite the high temperatures, registering as high as 50C, I was determined to make the most of my first trip to the picturesque town.

With my guide book in one hand and a camera in the other, I set out to explore the town centre, using the ringing church bells as my map.

Street after street of quaint whitewashed houses quickly began to blend together and I became more lost with each moment.

Looking around for someone who could provide directions, it dawned on me that I had not actually encountered another person since I left the bus station.

In fact, with all the shops closed and the roads empty, I felt as though I was walking through a ghost town.

And with the heat growing ever more stifling, it was no wonder the local folk were avoiding the outdoors.

It seemed they had figured out the key to living in this heat: avoid it at all costs!

But I was on a mission to determine whether Ecija lived up to its reputation as the hottest destination in Europe.

As beads of sweat filled my forehead and my eyes fought to stay open against the intense sunlight, the answer was a resounding yes.

Eventually, by some miracle, I came to a church (below) – almost certainly not the one whose bells I had heard – but a church nonetheless. 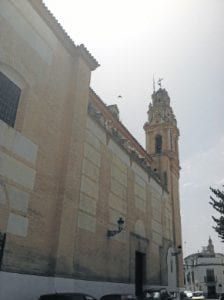 After taking a few snapshots of the charming, Moorish-inspired structure, I noticed the tower of another church in the distance and set off towards that.

Along the way, the midday sun continued to shine with an intense fervour and any bit of shade seemed to disappear as soon as I reached it.

While my heat-filled adventure across Europe’s frying pan was certainly memorable, I would not recommend that anyone travels outside in such high temperatures.

In light of the recent heat wave that swept through Andalucia, it is particularly important to exercise caution on exceedingly hot days.

Following a deadly heat wave in 2003 that affected most of mainland Europe and caused 141 deaths in Spain alone, the Spanish Ministry of Health developed a colour-coded health watch warning system to help protect people from extreme weather.

Last week, Ecija and much of Andalucia were placed on red alert – the most severe grading on the scale.

Yet even with these new measures in place, two people tragically died from the heat in Cordoba, showing how serious it can be.

Indeed, the average overall risk of dying during an extreme heat day increases by nearly 25%.

Heat stroke, also known as sunstroke, is the most serious heat-related illness, which can cause permanent disability or death.

The body becomes unable to control its temperature and the sweating mechanism fails, making it unable to cool down.

If you do plan to brave the heat, wear a hat and light-coloured clothing, apply sunscreen and drink plenty of water.

Oh, and probably best to stay out of the Frying Pan!