THE Olive Press is investigating Spanish links to the man charged with the abduction and murder of five-year-old April Jones.

Mark Bridger, 46, is said to have lived and worked in Spain for a number of years according to an Olive Press source.

It is thought he may have worked as a lifeguard on the Costa del Sol and also owned a Spanish registered L-reg Land Rover Discovery which has now been seized by police.

The blue Land Rover (below) is the same vehicle Bridger is said to have given the five-year-old a ride in two days before her abduction.

The Olive Press is asking for anyone who remembers this man or has information to contact the news desk at: newsdesk@theolivepress.es 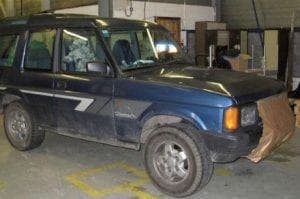