IT is a political hot potato that never cools down.

But, a new push to finally rid Andalucia of its countless Franco-era symbols, has reignited the debate yet again.

It comes after the Junta locked horns with Granada’s right wing city hall over demands to remove all its statues and plaques dedicated to the former Fascist dictator.

The Junta – staunchly socialist for three decades – insists they must go and town halls around the region will be fined if they don’t comply.

And to add salt to the wounds the news was broken during the unveiling of a plaque to the 4,000 left wing Republican soldiers and sympathisers shot during the period at Granada’s San Jose cemetery.

Becoming an official Memorial Site, the third in Andalucia, it has been installed above a series of bullet holes in a cemetery wall.

At a moving ceremony, 200 relatives witnessed the plaque being unveiled and heard Junta Deputy Leader Diego Valderas, of the IU party, insist that the regional authority would now become an ‘active actor’ in continuing to remember those fallen during the civil war and beyond.

It is the fifth time of trying, with the local PP town hall each time taking down previous plaques installed in their memory.

Insisting that almost as many right wing residents and soldiers were killed during the early stages of the war, the town hall believed it was unnecessary.

While it has now finally agreed to allow the latest memorial to stand, it is concerned that the authorities are failing to remember the dead on both sides.

A spokesman for the town hall, Juan Garcia Montero, insisted that Valderas’ proposal was ‘bullying’ and ‘tortuous’ and insisted he should not be allowed to use his power to ‘oblige’ people to take one path or another.

He added that Granada will not remove the statue dedicated to Primo de Rivera, nor rename the plaza dedicated to him.

“It should be the judges who ultimately decide and not the politicians” he said, adding that the town hall was prepared to face the consequences.

“If they get away with this, next the Junta could start removing local leaders for painting walls the wrong colour or putting up odd shaped street lamps.”

PP vice-president Ana Corredera insisted that the moves were ‘grotesque’ and were being used as a smokescreen to cover the serious financial situation which Andalucia is currently suffering. 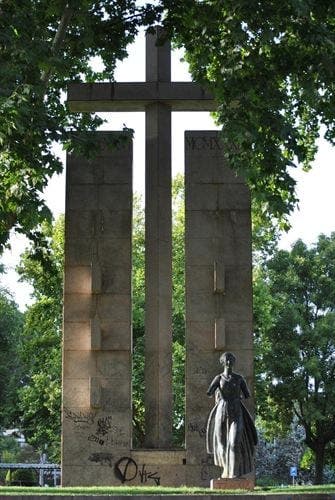 The region still has numerous reminders of its Fascist past on display in many cities.

These include the cross of the fallen (Cruz de los Caidos, pictured left) in Cordoba, an enormous granite structure erected to the war dead during Franco times.

An enormous monument, the town hall insists there are too many ‘technical problems’ involved in removing it and it should remain.

However, a few weeks ago the city removed a number of plaques including one to General Varela, one of Franco’s generals during the civil war.

Inside the city’s celebrated mosque a plaque commemorates the killed Republican forces, describing them as ‘victims of religious persecution’.

In Jaen, a number of symbols remain, the main one being the football stadium Estadio La Victoria, which is a reference to the victory of Franco’s forces.

In Sevilla, the university has failed to remove six right-wing plaques from buildings, insisting they are on protected buildings.

Of course, one of the largest monuments left standing in Spain is the Valley of the Fallen (Valle de los Caidos, pictured below), near Madrid.

This huge monument, which even makes the Guinness Book of Records, was built over decades by Republican soldiers and was meant to commemorate the dead on both sides.

But in reality it is really a lasting memorial to Franco, whose body is also buried there, alongside that of Falange founder Jose Antonio Primo de Rivera. 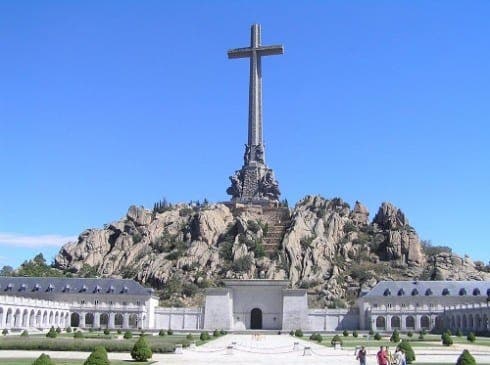