SPAIN’S wealthy region of Catalonia votes today in an election that could determine whether it eventually breaks away from the rest of the country.

The region must choose a new assembly, after a campaign dominated by the issue of independence from Spain and financial woes.

Like the Basque Country, Catalonia has its own language and sees itself as different from the rest of Spain.

Until recently, Catalans were content just pushing for greater autonomy, and stopped short of seeking independence.

But Spain’s economic problems, including a 25% unemployment rate, and tough austerity measures imposed by Madrid have added to the Catalans’ discontent and persuaded many they would be better off on their own.

And film-maker Pedro Almodovar is among 300 high-profile Spaniards to sign a manifesto opposing Cataluna’s bid for independence.

The actors, economists and political leaders from across the country have added their voice to the campaign in an effort to maintain unity within Spain.

“Several hundred intellectuals and professionals have signed a call in favour of federalism and the left to respond to the growing secessionism being pushed by the Cataluna government and other nationalist political forces,” read the manifesto.

Over 5.4 million people are elegible to cast their vote. The polls will close at 8pm tonight. 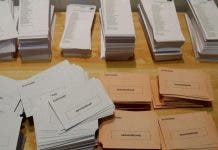