IT’S an important part of the daily routine for many expats in Spain.

But catching up on your favourite British TV programmes could soon be much harder after a change in satellite settings deleted Channel Five overnight.

BBC One, BBC Two, ITV and Channel Four are also expected to follow suit next year, which would leave many unable to watch popular shows including EastEnders and X Factor.

The move has been met with dismay by expats in Andalucia, who were given no warning of the impending switch over.

“I have been inundated with calls from people wanting to know what’s happening and what the timescales are, but the honest answer is that nobody knows for sure,” said Mark Wood, boss of Costa del Sol-based satellite company The Sky Doctor.

“There have been a lot of rumours about all the other channels being switched off on December 16 but it could be anytime between now and next August.

“I am 99.9% sure they will disappear eventually but all is not lost, all Sky channels are unaffected and Channel Five HD is still available.”

Mike Crompton, from Casares-based company Media Streamz is convinced that it will lead to a rapid growth in internet TV next year.

“I think we will lose all good UK channels by next summer and the only way you will get them is via internet streaming,” he said. 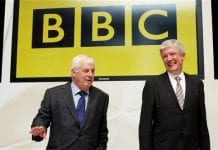 One is not amused!