A POPULAR British expat has died cradled in a close friend’s arms after a horrific Christmas car crash.

The early-morning tragedy happened near Alcaucin on December 27 when his car full of revellers spun off the road during a night out.

The driver, Simon Dent, was thrown through the windscreen and died on the spot, while two friends were rushed to hospital.

The 34-year-old, from Enfield – who ran the Rendevous Restaurant in Puente Don Manuel with his partner, Victoria – was described as a ‘fun-loving’ popular man who lived life to the full.

A close friend, who asked not to be named, said: “There was nothing we could do to save him.”

The man, who had been out with Simon in Puente Don Manuel before the crash, added: “It is very hard to talk about what happened. It’s still very painful.”

The friend – who had been a passenger in a second car returning home from the festive night out – continued: “It’s a very close community here and everyone knew him.

“He was a popular, fun-loving man who always lived life in high-spirits.

“He enjoyed socialising with friends and having a good time, all the time.”

A 24-hour candlelit vigil was quickly set up at the restaurant with candles, cigars, flowers and letters. 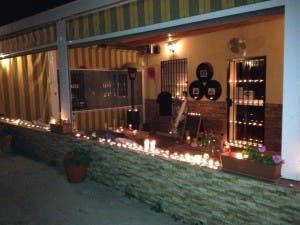 Tributes to the restaurant owner, whose funeral was at the weekend, came in on his Facebook page.

Abbie-Grace Johnson said: “Rest in peace Simon, you will never be forgotten”

Adrian Lightfoot added: “I hope you can understand what I can’t put into words. R.I.P my friend, I am sure we shall meet again in the future and have it grande simon style!”

His mum and dad, Angela and Ken Dent, have since thanked friends for their support.

On a Facebook post they said: “We would like thank everyone for your kind messages, love and offers of support which has been a great comfort to us. R.I.P our darling Simon. May the Angels keep you safe till we meet again.”

More than 150 family members and friends attended his funeral.

Spanish authorities are now installing safety posts at the junction in the hope of making it safer.