A BRITISH couple have slammed the authorities for failing to compensate them for the demolition of their home five years ago.

Len and Helen Prior had their property bulldozed in Vera, Andalucia, in January 2008 over ‘planning irregularities’.

This was despite having the correct paperwork signed off from the town hall.

“This whole mess would be bearable if it made any sense,” Helen told the Olive Press.

“The latest court ruling saying ‘our land can only be used for farming, forestry or animals’ is insane.

“Our land butts onto the land of three of our neighbours, but their land does not have to be used for forestry, farming or animals.”

The expat, from Berkshire, who lives with her husband in a garage on the property added: “How can it be possible that this is the only plot which has to be used for that purpose when they are all the same size and have the same criteria?”

She added: “I would think that the average five-year-old would see there is no logic behind this ruling.

“The court said that Vera had to pay our compensation, but how long will it take the court to decide how much compensation Vera will have to pay?

“Vera has no money apparently, but surely as a public organisation it must carry Public Liability Insurance.

“If not, why not? This is not just injustice, this is stupid injustice.”

In a similar case in Albox, a British couple are to appeal to the European Court of Human Rights in a last ditch effort to save their home from demolition.

Like the Priors, the unnamed couple have been forced to endure a lengthy legal battle after becoming embroiled in a planning dispute between the town hall and the Junta. 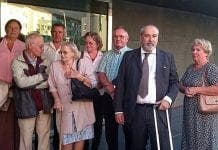