A POLICEMAN seriously injured after being shot in Gibraltar is recovering in hospital after leaving intensive care.

The 38-year-old Gibraltar Defence Police officer is receiving specialist treatment in Spain after been shot in the abdomen at Europa Point on Tuesday.

Three men in their 30s arrested on suspicion of attempted murder are continuing to help police with their enquiries after a magistrate agreed to give officers more time to question the trio.

Two guns have been recovered, one from the sea bed, while six vehicles have been seized and nine properties searched on the Rock.

The shooting of the unnamed officer, who was off-duty at the time, is not thought to be linked to his work. 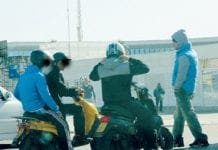 Smoking them out in Gibraltar

John Culatto - 7 Jul, 2020 @ 18:50
THE police made a fresh appeal for witnesses of a suspected murder of a Gibraltar dad two years ago today as the mystery continues to baffle the RGP.