I’M sitting in the Marbella Club watching the most spectacular of sunsets.

It is a bracing evening, but a chilled bottle of 1925 Alhambra beer slips down nicely to an ambient soundtrack straight out of Ibiza.

The main difference… I’m not overlooking the sea, but sitting ABOVE the cloudline, watching the sun go down over the ski slopes of the Sierra Nevada.

In what must easily be Andalucia’s most exciting new boutique hotel of the year, the Costa del Sol’s famous Marbella Club group has opened a chic retreat on the Granada slopes.

The 20-room style palace – designed by Briton Andrew Martin – is the epitome of ‘cool’ and the perfect addition to what is fast becoming one of Europe’s hippest ski resorts.

Already seeing the return of the Spanish royals, who traditionally frequent the Pyrenees to ski, there is a real sense that the Sierra Nevada is moving back towards its 1960s heyday when the likes of Sean Connery and Prince Alfonso Hohenlohe regularly came up for holidays.

“The Prince brought friends such as Sean up to the slopes,” explains Marbella Club area general manager Franck Sibille.

“This was the place to come for the rich and famous who spent much of the year on the Costa del Sol.”

“In the 1960s everyone knew of the Sierra Nevada, but somewhere in the mists of time – perhaps with the property boom of the 1980s and 1990s – it got forgotten.”

“But now it is finally making its way back again.”

There is no doubt that this is the case. Having visited the resort for the last six years I have seen a distinct move upmarket, in particular with the arrival of better quality restaurants.

These include stylish Italian Ci Vediamo and this year Argentinian-run Antares, which serves up an incredible cerviche straight out of Peru.

There is a new wine bar in town and even a Veuve Cliquot champagne bar half way up the slopes.

One restaurant Campo Base recently catered for Prince Felipe and his wife Leticia, who turned up by helicopter for a couple of days skiing.

None of this however, should come as a surprise with the resort now counting no less than 105 kilometres of runs, the second highest ski area in Spain after Barqueiro (115kms) in the Pyrenees.

But then you have to factor in the weather and length of season in the Sierra Nevada, which is longer than almost any other resort in Europe.

While it’s foggy in the Pyrenees and they’re shivering in the Alps, this month I was able to ski down the slopes in just a long sleeve shirt.

Even better, a coffee and bottle of Lanjaron water came to just over three euros… and that was half way up the slopes! 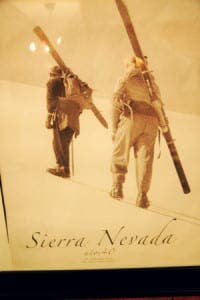 “Here we sell the weather, not the number of kilometres,” explains David Navarro, of el Remonte ski hire shop. “And mostly prices have not gone up for three years.

“On top of that you are just over an hour from the beaches of Almunecar and half an hour to the Alhambra. That is hard to beat.”

At the same latitude as Cyprus and just 30 miles from the beaches of the Costa del Sol, it is nothing short of amazing that you can ski here from December through to May.

This is all to do with the altitude of the Sierra Nevada, which has its highest peak in Mulhacen, a staggering 3,482m above sea level.

From the top of the highest ski lift, at 3,300 metres, the views make the Mediterraneanan below look like a small pond, with half the coastline of Morocco clearly in view.

Competent skiers are spoilt with the amazing runs of the Laguna de las Yeguas area, including the celebrated Olympic run, which is full of twists and turns.

You can sometimes find yourself skiing alone midweek for up to ten minutes and the sheer nature and landscape are spectacular.

It certainly pays to pick your days to visit with Christmas and Semana Santa seeing the resort rammed, with sometimes big queues for the ski lifts.

Then there is Semana Blanca (literally ‘white week’) – or half term at the end of February – when school children can learn how to ski, while bank holidays can also be very busy and getting up to the resort can be slow.

That said, problems can be missed by arriving by 8.30am or by waiting till midday.

While a modern resort, Pradollano itself is a pleasant place to simply take in the air or a spot of lunch, and there is a fair amount for children to do, with entertainers and Disney figures wandering around at holiday time.

It has also, rightfully, got a good reputation as being a resort for fun, with the famous apres ski being some of the best in Europe.

“Since then the infrastructure changes were huge and it is now a big resort,” explains Jose Maria Rada Calvo, or ‘Chechu’. The 57-year-old has been running his ski school and rental business Snowpeople in the resort for over 30 years.

Giles Birch, who runs the British Ski Centre, says the resort has one of the longest seasons in the world, opening at the start of December and often going through to mid May.

“There have even been snowfalls in June and when the snow and weather are favourable, the openness of the terrain provides some of the most exhilarating off piste skiing to be found anywhere.”

And then there is the famous adage that it is easy to have a morning’s snowploughing in the Sierra Nevada followed by an afternoon on the beach.

Two years ago, local Granada newspaper Ideal decided to try it out the theory, picking a sunny day in May and a couple of foreign students based in Granada.

Picked up in Granada at 8am they were skiing on the slopes from 9am to 1pm, before taking the 75 minute drive down to the Costa Tropical resort of Salobrena.

“It worked perfectly and by 3pm they were settled in eating a paella on the beach,” explains Santiago Sevilla, from Cetursa, the company that runs the resort.

“Then by 9pm, not content to call it a day, they were having a tapas crawl around the Albaicin of Granada just to add the icing on the cake,” he adds.

A real treasure in Andalucia