CAMPAIGNERS are to stage a ‘human chain’ protest in Fuengirola tomorrow in an effort to stop gas drilling off the Costa del Sol.

The group, Citizens Against Oil Exploration on the Costa del Sol, will gather at 12pm on the promenade close to the Chiringuito La Caracola.

Concerns have grown about the effect oil exploration could have on the Costa del Sol’s tourism industry, the leading source of employment in the area.

“The main reason we are doing it is to raise awareness,” said campaigner Luis Sanchez Garcia.

“Many people have no idea about this, but if everyone gets together maybe we can make a change in the plan.

“We know it is still going to go ahead but I believe a citizens voice and opinion is always important.

Local PSOE mayors have already teamed up with Greenpeace activists in publicising the risks of the drilling, fearing a disaster similar to that of the Prestige oil tanker spill in 2002.

There have already been two protests held in the neighbouring town of Mijas, with a boat trip organised to take residents to the proposed drilling spot next month. 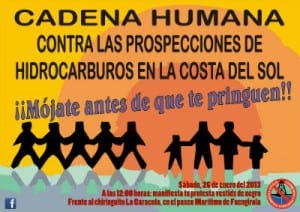