A BRITISH expat witnessed a dog ‘brutally beaten and killed’ outside her home in Almogia, Malaga.

Susie Murdoch, 55, saw a man trying to retrieve a male mastin from the top of her drive before launching a vicious attack on the animal.

“I saw the mastin, then a man following it and shouting as it tried to hide behind a tree.

“He picked up a very large stick from the ground and began beating the dog so I ran up the drive shouting,” said Murdoch.

“He shouted something back at me in Spanish and then walked away.”

As the owner left the premises, Murdoch went after the injured animal.

After nearly 30 minutes of searching, Murdoch saw the dog collapse in a nearby field through a pair of binoculars. 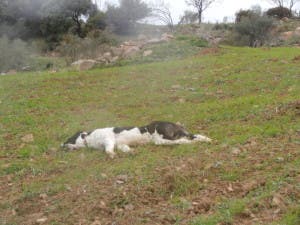 Murdoch, originally from Brighton, found the animal dead with what appeared to be a broken spine.

After reporting the attack to local police, Murdoch has been asked by some locals to withdraw her claims because ‘the man has a wife and children’.

“That is something I will not do,” she said.

“It’s absolutely disgusting, the dog was killed just because it wouldn’t go back to him,” added the expat.

It emerges that the man, who is thought to be in his mid-forties, also owns several other animals.

Mastins are commonly used throughout Spain to guard livestock due to their size and temperament.

The incident is just one of many recent reports of animal cruelty in Andalucia, with one man running over his own dog in Estepona.

The case has now been referred to the Guardia Civil.