CAMPAIGNERS in Fuengirola made a ‘human chain’ along the coastline as their battle against gas drilling continues.

Campaigners hope the series of protests will help expose concerns about the effect drilling could have on the Costa del Sol’s tourism industry, the leading source of employment in the area.

There have already been two protests held in the neighbouring town of Mijas, and a boat trip has been organised to take residents to the proposed drilling spot on February 17.

“I feel it’s getting bigger every time,” said campaigner Luis Sanchez Garcia before the protest.

“Many people have no idea about this, but if everyone gets together maybe we can make a change in the plan.

“We know it is still going to go ahead but I believe a citizens voice and opinion is always important. 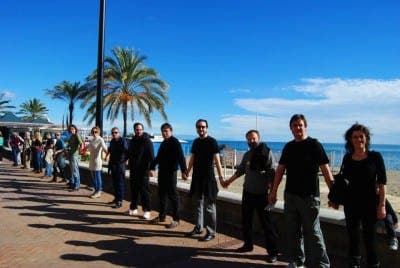 The cruise will start from Benalmadena Marina at 10.30 am and from Fuengirola Marina at 11.30 am.