FEATHERS were ruffled when Andalucia’s Three Kings’ celebrations took on a political slant.

A petition was launched demanding that a black man should play the part of King Baltasar – rather than painting a white person black.

The petition on change.org describes the tradition as ‘making no sense’ and has now attracted more than 2,000 signatures.

Meanwhile, the PP was accused of hijacking celebrations for its own political ends.

The sweets handed out in Puebla de Obando in Extremadura were in PP wrappers, while in Malaga the parade started behind a giant seagull – the PP’s symbol.

But celebrations in Santiago de Compostela were disrupted after the theft of King Baltasar – or at least his cardboard cut-out.

Officials found the figure outside the immigration offices, bearing a placard protesting against the use of razor wire at the Morocco-Melilla border.

The town has previous experience of Christmas celebrations turning political – with baby Jesus being stolen last year, in a protest against home evictions. 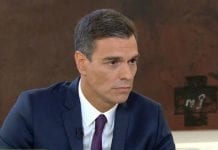 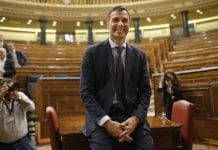