Jose Manuel Garcia Margallo said EU countries have discussed asking the European Commission, the EU’s executive arm, to explore the possibility of reaching an association agreement with Cuba. Association agreements normally pave the way for trade liberalization with countries outside the 28-nation EU.

But Garcia Margallo warned that any association agreement “would have, as a determining factor, respect for human rights.”

EU-Cuba relations are guided by a constructive engagement policy adopted in 2006 with the Caribbean island’s government as opposed to coercive measures such as the economic sanctions imposed by the United States.

Garcia Margallo told reporters in Brussels that EU foreign ministers will discuss Cuba at a meeting Feb. 10. Any changes to EU policy would require the blessing of all EU nations.

Cuba has enacted a series of reforms since Raul Castro became president in 2006. The changes have included opening up internet access and allowing Cubans to run their own businesses and travel abroad without asking permission from the government. 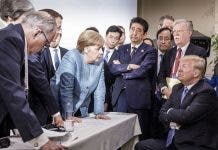 US considers imposing extra tariffs on goods from Spain and UK