SPAIN’S black economy has flourished as the country struggled through a brutal economic downturn.

A new study released by the Finance Ministry estimates off-the-books activity accounted for 24.6% of Spain’s economy at the end of 2012, up from 17.8% before the crisis began in 2008.

The shadow-economy problem is now one of the worst in western Europe. A report last year pegged Greece’s black economy at 24% percent of GDP, Italy’s at 21%, and Spain’s at 19$.

Another report from 2013 estimated that 1 million Spaniards work off-the-books.

Many officially unemployed people do “mini-jobs” in the black economy, while some who hold legal jobs supplement their income with underground work, he says.

The study says Spain’s government exacerbated the black-economy problem by raising taxes as it sought to reduce budget deficits—increasing the incentive for business to go underground—while failing to implement “efficient tax control.” Spain has only one tax inspector per 1,928 taxpayers, compared with 729 in Germany. 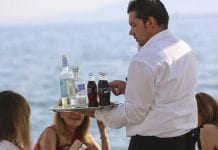