SO farewell then, Paco de Lucia. I may be the only person in the world to have walked out of one of your concerts. Over some damned silly argument with a woman in the row in front.

I’m sorry I missed the maestro described by Eric Clapton as “a titanic figure in the world of flamenco guitar”, and by others as ‘a Mozart of his time’. More so, since his home town of Algeciras became mine too, by adoption. Now he’s gone, I’ll never have another chance to watch his fingers flying over the strings like quicksilver.

Where purists ranted he wasn’t true to the flamenco form is where I liked his music best – a fusion of unexpected instruments (percussion), influences (classical and jazz ) and artists (Carlos Santana, John McLaughlin), broadening the appeal of a genre that sometimes seems too alternative and out-of-reach.

Because I still don’t quite get flamenco. The guitar-work, yes! The dancing, yes! But the canté … I don’t like to mention strangled cats so let’s just say l wouldn’t want it for a dirge at my own funeral, in case it made the vicar suicidal.

I can’t get impassioned about flamenco like the Spanish do, with their exhuberant olé-ing. I’m not radiantly transfigured by what the Spanish call duende, although I wish! If they sold it in bottles I’d be first in the queue.

In the intimate salons where you can hear the best flamenco, I remain an outsider – the only one in the room with dry eyes and a stiff upper lip, while all around are emoting. If I sound like an uptight Brit, I’m not. Irish blood runs through my veins. Irish music moves me to Riverdance (home alone on the carpet)!

It can’t just be a nationality thing. My fellow expats join in with gusto while I stand cynically on the sidelines, like the little boy in the Emperor’s New Clothes. Paco himself said his music had greater respect abroad than in Spain. He refused to play at a concert in Seville with Plácido Domingo and Julio Iglesias because his name was at the bottom of the poster, in smaller letters bellow theirs, next to the ticket prices. 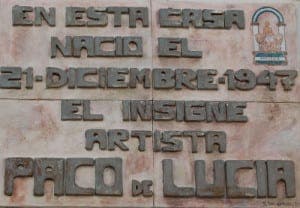 Algeciras will make amends with a Ruta de Paco de Lucía, a Paco de Lucía music prize and a museum or flamenco school – hopefully to help people like me to ‘get it’. The grey industrial port city could do with a major tourist attraction and Paco has posthumous pulling power. Through his music, visitors can share in its finer points; haunts of his youth that would have remained unsung, but for his music:

In death he will be honoured like a conquering hero. In life, all Algeciras had to show for its favourite son was a statue facing the docks on the wrong side of town and a rusting plaque outside the house where he was born.