THE Spanish parliament has overwhelming rejected Catalunya’s bid to hold a referendum for independence.

The northeastern region was seeking permission to hold a referendum on November 9 this year.

But after a marathon seven hour debate, 299 members of parliament voted against the proposal, 47 supported the bid, and one abstained.

Prime Minister Mariano Rajoy insisted before the vote: “As president of the government, I am and I will be everybody’s president.

“Catalunya should remain in Spain because I can’t think of Spain without Catalunya, nor of Catalunya outside Spain and outside Europe,” he added.

Rajoy repeated his argument that the Catalunyan referendum would be illegal, as under the Spanish constitution a referendum on sovereignty must be a national vote, rather than a regional one.

All the major parties, including the ruling conservative People’s Party, the main opposition group, the Socialists, and the Union for Progress and Democracy voted against the petition.

All three were determined to block the petition, and the outcome of the vote was never in doubt.

Catalan and Basque nationalist parties supported the vote, and Catalan authorities immediately announced that this was not the end.

Catalunya’s regional head of government, Artur Mas, said: “This is not a final full stop. It’s a new paragraph and from here, from this painful ‘no’, Catalunyan institutions will look for new legal frameworks, to allow for this November ballot to take place.”

If the Catalunyan authorities are successful, the sought-after bid would take place just two months after the Scottish vote on independence. 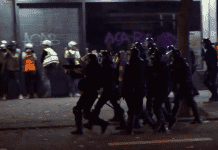 WATCH: Wall of police fires on protestors as rocks and rubber bullets fly in Barcelona