At their meeting in Madrid July 17, the Iranian ambassador expressed desires to expand the still friendly ties between the two nations.

Felipe reassured him that Spain’s government agencies are fully prepared to work with him to accomplish his goals despite any controversy surrounding Iran’s role in the Middle East.

Historically, Spain and Iran have had a mutually beneficial relationship, with trade between the two reaching over €4 billion in 2011. 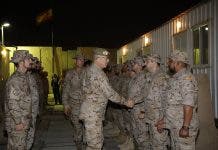