A BABY dolphin has been rescued off Caleta de Maro beach, Nerja.

A family spotted the distressed creature after it beached on the shoreline on July 25, and called 112.

Civil Protection, Local Police and specialists from the Centre for the Recovery of Threatened Marine Species (CREMA) moved the animal further up the beach where it was given emergency treatment before being transferred to Malaga.

The dolphin, around one year old and measuring just over a metre in length, is thought to have become separated from its pod. 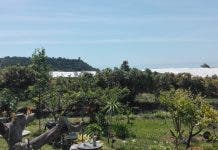