THE son of disgraced ex Catalan leader Jordi Pujol has been accused of corruption after he ‘made millions’ from one of Andalucia’s most controversial developments.

An investigation has been launched after it emerged that Jordi Pujol junior allegedly syphoned off €1.5 million from the disputed Los Merinos golf macroproject, near Ronda.

According to reports, the businessman made the money in shady negotiations between the developers and construction company Copisa.

The project was stalled for not having permission for water and after a series of large protests involving both Greenpeace and Ecologistas en Accion.

Provisionally passed by a former Junta Public Works Minister Jaime Montaner in the 1990s, the scheme included two golf courses and up to 1,000 houses built on Unesco-protected land.

The scheme went ahead eight years ago despite not having planning permission, with developers carving up a virgin area to start putting in the infrastructure.

Activists and locals claimed that the project was being protected from ‘up high’ thanks to Montaner’s close friendship with former Junta leader Manuel Chaves.

Eventually the authorities stopped the work via the courts, but this has not stopped Ronda Town Hall continuing to receive stepped licence payments, of up to €20 million.

But now a probe by Madrid’s crack police investigation unit UDEF are looking into alleged illegal commissions that Pujol charged to the Copisa Group.

The ex-president’s son allegedly took more than €1 million between 2005 and 2006, for ‘mediating’ between Copisa and Ronda Golf and Country Club SL.

This came despite the fact that the president of Copisa, Jose Coronado Mateu, was also a key official at Ronda Golf, meaning he effectively negotiated with himself.

Furthermore, in 2008, company New Piave Seis paid Pujol nearly €500,000 for the ‘acquisition and sale of shares’ putting his Los Merinos profits at over €1.5 million.

The Catalan businessman has reportedly secured ‘business’ from 17 companies over the last decade, working as a so-called ‘mediator’.

He claims to be an expert in everything from real estate to the oil business… and even the development of ‘photovoltaic’ plants.

The investigation into his business affairs was launched as his father was this month stripped of his titles in Catalunya.

Pujol senior – who led the Catalan government for 23 years – has also lost his privileges and pensions following the confession that he hid millions of euros in offshore accounts in order to avoid paying inheritance tax.

In total, investigators found that he had kept €18 million in various accounts in Switzerland. 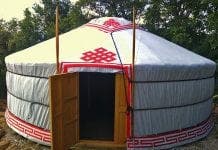 OPEN SEASON: Giles Brown puts up many a guest at his place, but draws the line at garden yurts