The British celebrity chef called in the paper to run a rule over Granada Divino, which was losing its owners Milan and Gina €4,000 a month.

Clarke, 45, who is also the main critic for website www.diningsecretsofandalucia.com, was asked to give his honest thoughts on the eaterie in Gaucin.

After Ramsay had spent a week working with head chef Neil Brown and his team, Clarke was brought in to give his verdict.

Describing Clarke as ‘Andalucia’s top food critic’ Ramsay warned staff: “With a food critic in the house you need to be on top form.”

“They’ve made a really good start and I’m excited about the future, it is now easily the best restaurant in Gaucin,” he told the Channel 4 show.

Ramsay later returned the compliments, saying: “I like the Olive Press, I’ve seen it everywhere since I’ve been here.”

Clarke has interviewed a number of Spain’s top chefs including David Munoz, Dani Garcia and Pedro Subijana, as well as Jamie Oliver three times, while working for the UK press. 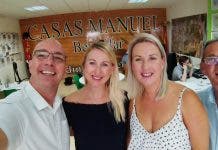