OVER half a century has passed since the first high-speed sleeper was laid on Spanish soil, sparking the nation’s bullet train fascination into motion.

Inaugurated in 1992, Spain’s first high-speed train whizzed passengers through the Sierra Morena mountains on the 470km track connecting Madrid and Sevilla in just two and a half hours.

The sophisticated track design, alongside a complex tunnelling mission, saw the line labelled as ‘one of the most advanced high-speed lines in the world’.

Today Spain’s bullet train network spans across more than 3,000km of track – weaving its way across the country like veins around a body.

Reaching speeds up to 300kph, the AVE is now the second largest high-speed rail system in the world, beaten only by China’s enormous 11,000km network.

However it has not all been plain sailing.

Due to the difficult terrain across Spain, and the enormity of the network, technical setbacks were almost inevitable.

Work on the Abdalajis tunnel – north of Malaga – cut into a nearby village’s natural water supply in 2008.

The derailment at Santiago de Compostela in July 2013 – in which 79 people lost their lives – was Spain’s worst rail disaster in 40 years.

And even today, the Junta is taking Ana Pastor, the Minister of Public Works, to the European Court over a ‘lack of sufficient action’ into the reconstruction of track between Bobadilla and La Indiana.

And tempers are set to boil over, when the likely decision comes to terminate further work on the semi-finished AVE route between Marchena and Bobadilla, which has so far cost the Andalucian government a huge €280 million.

ADIF – Spain’s high-speed track manufacturers – announced that it will construct a €23 million loop near Cordoba as an alternative, however it would appear a total lack of joined up thinking and planning between central and local governments has resulted in an unnecessary exhaustion of funds. 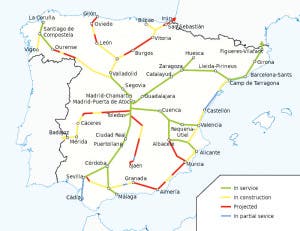 So, how does a line so technologically advanced – encountering so many setbacks – support itself financially in a country marred by economic difficulties? The simple answer: it doesn’t.

Investment appraisals for high-speed routes are a sorcerer’s arena of accounting – just look at the UK’s attempts to put a figure on HS2 plans.

RENFE however is making substantial positive net earnings on its AVE routes, and anyone regularly travelling on the Malaga-Madrid line knows that booking Turista class in advance is necessary because of the high demand.

It is, however, more difficult to estimate net profits after allowing for capital depreciation and interest charges, in addition to the high cost of high-speed track maintenance.

One recent estimate for the break-even date for the Madrid-Sevilla route alone is 2080 – 88 years after launching – and for HS2… Infinity!

Despite the cost, the benefits of having the world’s second largest bullet train network are clear to see.

ADIF has established itself as a world leader in high-speed track design and is set to become one of Spain’s leading exporters, with projects already underway in North and South America, eastern Europe, the Middle East and central Asia.

This means constructing high-speed tracks in Spain is also considerably cheaper than in other parts of the world.

Punctuality of AVE trains is also a big plus, with over 99% of trains on time, and compensation paid to passengers for services running just a few minutes late.

The density of traffic on AVE routes is presently low so punctuality is easier than, say, in Germany where medium distance and commuter trains use the same network.

The downside being, due to the steeper gradients of AVE rail compared to conventional tracks, the use of high-speed lines is not possible for freight trains unless they are light.

As for the argument that AVE routes encourage dispersal of industry and commerce away from Madrid to the country’s outer regions, the jury is still out.

It might be the case that businessmen can locate their core activities in Madrid more easily and live in the outer regions.

However, the evidence suggests AVE routes in Spain are not just for businessmen on expense accounts.

The majority of passengers on the Malaga-Madrid route are in fact people visiting relatives, on shopping trips, and tourists.

As for the cost to the commuter, AVE trains charge a fair buck and then some.

Compared to journeys offered by Avant, Alvia and Altaria – largely operating on the same track, and still reaching high speeds in some sections – the cost of a bullet train journey can be almost double the price.

In fact, services operated by Avant can reach a maximum speed of 250kph for a much more affordable price.

And when you consider AVE trains very rarely actually clock their 300kph top-speed, questions over the bullet train’s continual expansion are awkward to answer.

Although it is advertised that AVE trains travel at 300kph, a journey between Cordoba and Sevilla has an average speed of 220kph and Barcelona to Madrid around 200 kph – speeds which can also be reached by the more cost-effective Avant service.

And yet, the increasing desire to cram more hours into the day drives the dream of quicker transport.

Hundreds of millions of euros have already been – and will continue to be – thrown at the project to keep Spain ahead of the rest of the world when it comes to high-speed rail.

Love them or hate them, think they are a necessity or a luxury, after 25 years in the Spanish domain, the bullet train is still shooting across the country.

SPAIN’S bullet trains can go much faster than the country’s rail network can handle.

The most recent Siemens and Talgo manufactured trains are capable of hitting 350kph, but this speed is seemingly unattainable in Spain as current track beds are loosened at speeds over 325kph.

The higher speeds also see stone chips flying up and damaging trains’ undercarriages, while signalling systems would need upgrading too.

AN enormous amount of abandoned high-speed rail has been left strewn across the Andalucian countryside.

ADIF – Spain’s high-speed rail manufacturer – has announced that the unfinished 76km track from Marchena in Sevilla to Santa Ana in Caceres will not be completed due to funding cuts. 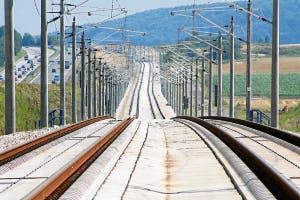 The proposed route was started in 2005 after former president Manuel Chavez and Magdalena Alvarez agreed the government of Andalucia would fund the project.

The route would have cut the journey time down to 71 minutes – 16 minutes faster than currently provided – in a non-stop service.