A GORGEOUS vista unfolded as we drove past Casares and looped around the valley towards Gaucin, known as the ‘balcony of the Serrania’ because of its wonderful views.

One of Europe’s loveliest drives, I was heading off towards the market town of Jimena de la Frontera, which sits alongside the amazing Alcornocales natural park.

The highlight of a stop off in Gaucin is the stunning Castillo del Águila, which sits at 688 metres above sea level and offers a classic eagle’s perch of the surrounding area.

From here you head along a long windy road to Jimena de la Frontera, a whitewashed town officially declared of Historical and Artistic Importance in 1983.

A wonderful weekend getaway, it has been inhabited by Iberians and Phoenicians, as well as the Romans, while its 13th century Moorish castle has looked out over many a bloody battle.

Today things are rather more tranquil and you will see plenty of children running around, as well as men on horseback and remarkably few tourists.

So friendly is the place that one mother-of-two led us by car to our charming hostal for the night.

It may be a mostly quiet town but that doesn’t mean that the locals don’t know how to party and we had a fun time on saturday night at Hostal Anon, with live music and a decent young crowd.

In the daytime though it’s all about putting your walking shoes on and heading around the steep cobbled streets… and, in particular to the castle that rises above it.

The eighth century castle became a National Monument in 1931 and has recently been renovated, but it was once part of a Moorish defence system that stretched from Olvera to Tarifa.

It remains as a constant reminder of Jimena’s intriguing past as a ‘frontera’ – or frontier – when it guarded the western flanks of the Arabic Al Andalus with Christian Spain.

The castle witnessed many battles as Christian armies laid frequent siege to the fortifications protecting the important Moorish stronghold of Algeciras.

The view of the surrounding countryside below is amazing, in particular the sprawling forests and undulating hills of Los Alcornocales natural park behind.

One of Europe’s largest protected spaces, it is the ideal spot for putting on your walking boots and exploring.

When the Hozgarganta River swells there are dreamy waterfalls and pools to be found but, as ever, ask the locals to point you to the best spots.

The park is also home to the prehistoric paintings at Laja Alta which incredibly date back as far as the Bronze Age.

After a day spent exploring the wild and stunning terrain, Jimena offers a range of enticing dining options with a mix of Spanish and Moorish cuisine.

The area is known for mushroom picking and game hunting, but the one thing you can’t leave without trying is the sweet ‘piñonate’ cake.

For those on a budget, here’s a free tip – since the castle doesn’t get locked up at night, it’s ideal for a candlelit (romantic) picnic and some good old-fashioned stargazing.

On our way back from Jimena the next day we headed to visit the castle at nearby Castellar de la Frontera.

The drive up to the village passes through forests of cork trees and past the beautiful turquoise reservoir formed by the Guadarranque River.

When you get there, the small village within the old castle walls has a traditional Hispanic feel but is sprinkled with quirky shops selling a mix of Moroccan jewellery and trinkets.

The Aljibe restaurant is well worth a visit, if only for the friendly Spaniard who’ll let you hold and pat his hawk while you take pictures with it for €3.

When you finally head home after a weekend of castle-hopping, rejoice in the knowledge that hidden just behind the Costa del Sol’s shining bright lights lie some of Spain’s most precious mountain gems. 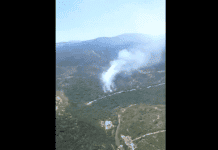 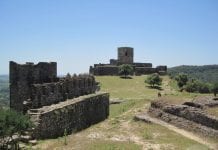 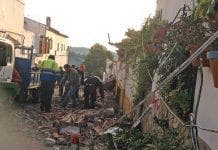 Christmas miracle as British pensioner survives her roof falling in