HIGH on a secluded hillside, surrounded by only chestnut trees and cork oaks lies the spectacular Finca Buenvino.

Part of the Chesterton family for 30 years, the pink-washed guest house lies at the heart of the Sierra de Aracena natural park, one of the most picturesque and unspoilt parts of Andalucia.

Olive groves and orchards fill the valley below the house. Nearby is the beautiful dehesa; the rolling grassland where black Iberian pigs make their home.

The guesthouse owners Sam and Jeannie – a husband-and-wife team from the UK – also run cookery courses for small groups.

Cook Jeannie, who trained at the Cordon Bleu School in London, has a unique take on Spanish and Mediterranean cuisine and has published a collection of her inspirational recipes in her debut book.

“Although my cooking is influenced by Spanish ingredients and methods, this is not a thoroughbred Spanish cookbook, of which there are many,” says Jeannie.

“Instead, it’s a reflection of our way of life and the food we share with our guests.”

Jeannie takes her inspiration from all over Spain and the other cultures that have influenced Spanish cooking. 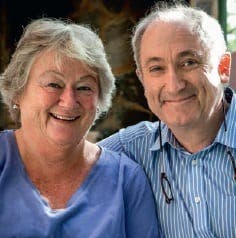 “My cooking incorporates the pounded picadas of Catalunya – a mixture of garlic, bread, spices or even chocolate added to a dish at the end of cooking – and the use of fruit and spices in savoury dishes that is so typical both of Andalucia and of the Maghreb,” adds Jeannie.

“In autumn, wild mushrooms spring up in the woods, while just-picked chestnuts from the forest below the house, roasted in the open fire, are perfect with a glass of rich, dry Chesterton Oloroso straight from the barrel which sits in the conservatory.”

To sample some of this Andalucian idyll for yourself, try out some of Jeannie’s carefully-crafted recipes below, a handpicked selection from her new cookbook.

Jeannie and Sam’s cookbook – The Buenvino Cookbook: Recipes from our Farmhouse in Spain – is available to buy in store and online, for €25.50. 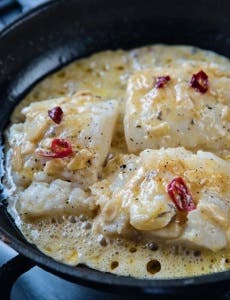 _ If you have one large piece of salt cod, cut it into three or four smaller pieces. Put the fish in a large bowl and cover with cold water. Leave to soak for 48 hours, ideally under a dripping tap or, if not, change the water four times.

_ Drain the cod, give it a good rinse in fresh water, then pat dry with kitchen paper. Be careful to remove all the water by pressing down on the fillets gently with the paper. Remove any dangerous looking bones with a pair of tweezers, but do not remove the skin as this contains the magic ingredient which will meld with the olive oil to make the sauce. 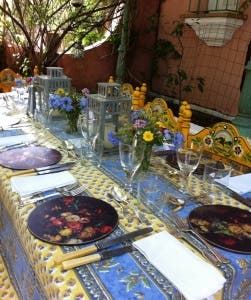 _ Heat the oil in a wide, fairly high-sided pan. The best is either terracotta or cast iron. You will need constant gentle heat when cooking the fish – and constant movement – but you do not want the oil to splash out over the edge.Sauté the garlic and chilli for two or three minutes until golden. Scatter in the parsley, stirring for about a minute, then remove everything from the oil with a slotted spoon and set aside.

_ Reduce the heat to very low. Add the fish to the pan, skin-side down, and poach. Do not fry at high heat or you will ruin the oil and brown the skins and it will not be possible to make the sauce which is the most distinctive part of this recipe. Move the pan in a circular motion almost constantly while the fish is cooking, or slide the fish about gently from time to time with a wooden spoon. It’s important to keep up this movement while the fish is cooking, so the gelatine in the skin is released into the oil and begins to make a thin custard. Some whitish bubbles in the oil are a sign that the gelatine is beginning to be released from the skins. The oil will start to froth around these white spots.

_ When you see the flesh of the fish begin to separate into ridges, it has been cooked sufficiently. Remove it with a slotted spoon and keep it warm in a low oven in a preheated serving dish.

_ Now get working on making an emulsion of the oil. It should be warm rather than hot. Take a small metal sieve and lower it into the warm oil until it is resting on the bottom of the pan. Now shake it about gently over a low heat, where you see the bubbles of gelatine forming. Work it around in a circular or sideways motion and you will see the oil begin to thicken. If this does not happen immediately, dip your fingers into a bowl of cold water and splash some droplets of water into the oil. Start once more, concentrating on one area at a time, then gradually moving from one part of the pan to the other until the whole lot of oil has thickened into a mayonnaise-like sauce. When the sauce is done, pour it over the fish and grind on some black pepper.

_ Decorate with the fried garlic, chilli and parsley and bring to the table. Simple steamed potatoes are the way to go.

THE Olive Press is celebrating the launch of The Buenvino Cookbook with a fantastic competition.

Up for grabs are three great prizes, with one lucky reader set to win a luxury one-night stay at the Finca Buenvino, expertly looked after by the gregarious and welcoming Sam and Jeannie.

Two runners-up will receive a copy of the cookbook, packed full of Jeannie’s favourite recipes.

To enter, just answer this question:

What is the English translation of bacalao?

Send your answers to newsdesk@theolivepress.es

LISTED: 276 municipalities in Spain’s Andalucia have no registered coronavirus cases in 14 days

Starry nights: Marbella is the Michelin star capital of Spain

Back on the paper round: Delivering the news in Spain

Garden of Eden: The young team at Marbella’s Cascada are carving out an exciting, healthy dining secret

Marbellous Marbella: Discover the gem of the Costa del Sol

State pension age in Spain could be raised to 67, says report

CANNIBAL JAILED: Madrid man who killed his mother, chopped her into pieces and stored her in tupperware, sentenced to...