WITH a glass of champagne in one hand and a foie and boletus burger in the other, the future king of Spain could not have been happier.

After a morning’s skiing in the Sierra Nevada this February King Felipe IV bowled up for a spot of lunch at the trendiest bar in the mountains, half way down emblematic piste el Rio.

With a group of friends, including his old skiing teacher, he tucked into three different types of burger and a bowl of lentils at the hip Nevada Terrace, sponsored by champagne house Veuve Clicquot.

Off protocol and in fantastic form, he liked the place so much he came back the next day, with a different group of pals.

“He said he wanted to ensure that the quality was as good as the previous day,” explains boss Alejandro Berdejo, who served him on both occasions.

“It was a massive surprise for us on both days,” adds the friendly Sevilla-born businessman, who is slowly sprinkling a bit of stardust on the resort via his marketing company Evento10 which he runs with his wife Silvia Peris, one of Spain’stop PR-gurus.

Through their champagne terrace and a hip new apres-ski bar N’ice on the resort’s main square, the couple are helping to make the Sierra Nevada glamourous again.

“We are hoping to make the place as hip as it was in the 1970s,” explains Silvia Peris, who has plans to bring some exciting international names to the slopes this season.

“We are entering a new golden age for the Sierra Nevada and are promoting its amazing way of life, its weather, food, champagne and style,” she adds.

The couple certainly have pedigree having spent the last two decades organising parties and events around the world, including the birthday parties of George Clooney and Cindy Crawford in Los Angeles… and visits for Prince Charles and Nicole Kidman to Spain.

While both are from Sevilla, Silvia partly grew up in Beverley Hills, where she became friends with Kevin Costner, which opened a lot of doors.

In contrast husband Alejandro has very much a solid catering background, having studied hotel management in Switzerland, before working for the Movenpick chain in Germany and later setting up his own hotel consultancy firm in Spain.

“We are working really hard to try and create a buzz on the slopes but, above all, keep the prices down. You can have a glass of champagne with us for just €7 and the tapas is not expensive.” 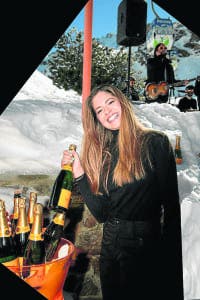