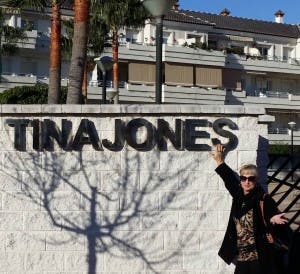 AT last I’ve solved a puzzle that’s been bugging me ever since I moved to Los Barrios: the identity of the mysterious Tina Jones.

I’ve been on her case for nearly three years now. Los Barrios is an almost exclusively Spanish pueblo, so the name of the urbanisation at the entrance to our village aroused my curiosity.

You couldn’t get a more British (well, ok, Welsh) name than Tina Jones. Who was this woman so honoured that one of the most exclusive (for Los Barrios) urbanisations in town is named after her?

I idly made a note to find out, then forgot all about it, as you do. But each time I passed the complex, the riddle niggled me anew, so I started asking around.

Was she the wife a local VIP, or some past Alcalde’s floozy? Was she alive or deceased?  Was she a spinster expat of this parish honoured posthumously for years of tireless charity work?

We do actually have one famous local expat, the late New Zealand botanist and explorer Betty Molesworth Allen, who retired to Los Barrios in 1963. She became even more famous when she discovered a rare fern growing in Los Alcornocales Natural Park, for which she was awarded the MBE. For botany buffs, that’s Psilotum nudum, the whisk fern, thought to be exclusive to the tropics until Betty’s fantastic find.

Betty became an adopted daughter of Los Barrios in 1988, and a botanical park was named in her honour (all overgrown with weeds now, she died in 2002).

But who would have thought that, after years at Singapore’s world-famous Botanical Gardens, Betty would achieve her greatest work when she fetched up in Los Barrios!

It must have been destiny that brought her from the other side of the world to this anonymous corner of Andalucia – call it the Los Barrios Effect – although it hasn’t yet rubbed off on me.

This Tina Jones must have done something similarly epic for the pueblo, or so I thought. But there was nothing on her in the local library and, believe me, if the lady who owns the next door sweet kiosk (the one run from her garage) doesn’t know, nobody does!

I gave it one more try at the Tourist Office. At first there were puzzled looks and denials. “No, we have not heard of zees woman”. Then the centimo dropped.

“Do you mean tinajones?” said the girl, to enlightened smiles all round, although I was still in the dark. “Indeed, I do!” I replied excitedly. “So who is she?

“You don’t understand,” replied the girl, refraining from muttering ‘dumb guiri’ to her eternal credit.  “Tinajones are earthenware jars”.

“Roman tinajones?” I parried, anxious to cover up my faux pas and rescue my ‘scoop’ from the spike. “No, the block was just a name the developers gave it when they decided to decorate it with the two giant tinajones you’ll see if you walk round the back.”

So now you know, and so do all the other people I asked who erroneously thought, as I did, that Tina Jones was a woman of note. It turns out she’s nothing but a pair of big jugs! 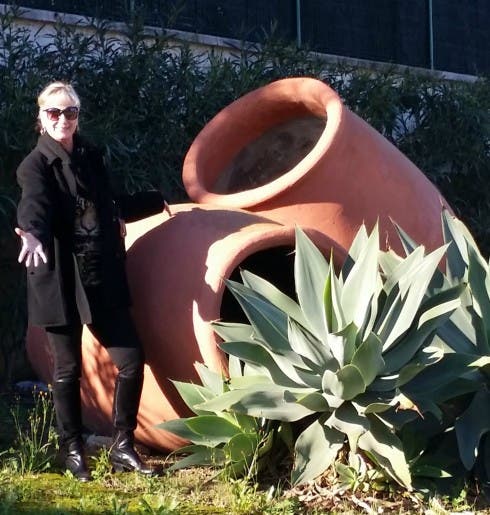