AN expat businessman who disappeared from Gibraltar in 2012 owing thousands 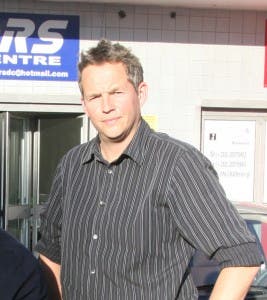 in unpaid bills is apparently back to his old tricks and living in Yorkshire.

Brit Richard Brooks also owes around £1,000 to Help for Heroes charity – money raised through the Soapbox Derby he helped organise.

Brooks arrived on the Rock in 2010 with big business plans, but soon vanished with an increasing list of debts to local companies.

Soapbox organiser Laura Green said at the time: “I don’t know where the money went but I have received calls from a lot of people wanting to know where he is.”

For three years Brooks seemed to have escaped, but now the Olive Press can reveal he is back in business in Darlington.

A Darlington charity source said: “He is a scary person, we grew anxious of him and looked him up and found the Olive Press article.”

“He appears to be doing exactly the same here as he did in Gibraltar.”

“He has been reported to the police but I am afraid to say much more,” they added.

His ex business partner Derek Dalmedo, formerly owner of DC Motors, was owed around £4,000 by Brooks.

“He left a string of debts believed to total well over £20,000. Everyone was looking for him,” he told the Olive Press.

When contacted by the Olive Press – also a victim of Brook’s unpaid debts – Brooks said: “You’ve completely lost me.” He then promptly hung up.

First ever corneal transplant in Gibraltar brings hope for the future

Gibraltar Government hits back at Opposition over housing waiting lists

Did you feel it? Earthquake rumbled Spain’s Malaga on Sunday afternoon