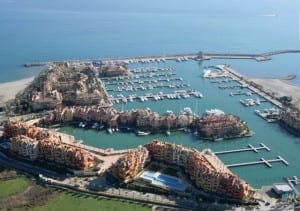 A BRITISH man has been arrested in Sotogrande for the murder of a suspected German paedophile, who was filming his daughter.

Kainth Devinder, 40, caught Sandro Rottman, 43, filming images of his daughter while out for a family meal at Spinnaker restaurant on Saturday night.

Despite Devinder demanding that he stop filming, Rottman continued.

The British man then seized his tablet and threw it to the floor, before attacking Rottman.

He allegedly punched Rottman in the head, before leaving the restaurant.

The Guardia Civil were called to the scene by the urbanisation security, and arrived to find medics attending to the victim.

Rottman was immediately transferred to the La Linea hospital, where he died from his injuries.

Devinder was arrested at his home, following statements made by witnesses at the restaurant.

Rottman appears to be very wealthy, posting photos to Twitter of classy hotels and meals out in Monaco, London and Beverly Hills, California.

One particular photo is of Hollywood actor Mark Wahlberg, with the caption: “Just having chips and ketchup with Mark Wahlberg.”