AN Atlantic gust sweeps through the abandoned cricket pitch and swirls around the minaret of an unexpected mosque. Across the Gibraltar Strait, a burst of sunshine lights up the majestic Moroccan mountains.

I swivel 360 degrees and try to decide which stunning image to photograph first. Uninterrupted views are not what you expect to find in postage stamp-sized ‘fortress Gibraltar’. But its spectacular southern tip, where the Atlantic meets the Mediterranean and Europe and Africa wave at each other across the Strait, is a wondrous little world of its own.

Europa Point may be familiar to the birds and the bees – it’s a favourite trysting spot for local lovers as well as the first landfall for migrating birds returning from Africa; but it’s a part of Gibraltar many tourists never reach.

But they should. Standing on the edge of its limestone cliffs, a fierce wind biting at my face, I could truly sense the power of this little nation, geographically and historically.

Europa Point is the polar opposite of Casemates, Main Street and Ocean Village but equally steeped in fascinating history. Plus, there’s not a monkey in sight.

Musician of the Royal Gibraltar Regiment, Tony Evans, 26, explains: “The compact size of Gibraltar means these sort of spaces are very limited and it is no wonder many locals regard it so highly, now more than ever.

“What was once the end of the world has been given a new lease of life.”

Instead of catching the bus – a prospect I tend to sneer at in tiny Gibraltar anyway – I took the varied and intriguing walk along the coast.

With bold and colourful apartment blocks clinging to the rock on one side of the road, and craggy coastline on the other, there was barely a soul around on this chilly February afternoon.

Passing Camp Bay lido with its classically-British holiday facilities, reminiscent of a 1960s Margate, I nervously navigated an endless tunnel blasted through the rock, eventually emerging into dazzling sunshine illuminating a wide open space. Practically a surfeit of space! What a contrast to the high rise office blocks and stacked tiers of apartments back in town, where every square inch is maximised.

Standing proudly at the tip of Europa Point is the red and white Trinity lighthouse, guiding vessels through the busy Strait. It was first lit in 1841 but is now entirely machine-operated.

Nearby Harding’s Battery provides another reminder of the outpost’s military importance. Named after Sir George Harding who was Chief Engineer in 1844, the sunken magazine below is now a visitor centre. 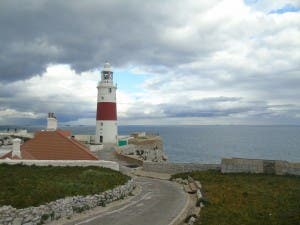 Set back from the cliff-edge, separated by green grass, a car park, a small café and children’s play area, is the striking Mosque of The Custodian of the Two Holy Mosques. Inaugurated in 1997, it was a present from King Fahd of Saudi Arabia and took two years – and around £5 million – to complete. It serves the 2,000-plus Muslim residents of Gibraltar and also contains a school, library and lecture hall. Its curvaceous architecture strikes a surreal pose against the backdrop of lofty, wind-sculpted limestone cliffs.

This whole other side to the Rock, the escapist’s Gibraltar, is the British territory’s last-remaining untamed outpost. Despite a £4.4 million facelift in 2010 and the reopening of Dudley Ward tunnel, closed for eight years after a devastating rock fall, it’s the part of Gibraltar that has seen the least development.

Until now, that is. At least one and possibly two major projects are destined to change Europa Point forever.

That transformation is already underway, with construction crews busy laying the foundations for Gibraltar’s first university, due to open this September. The fast-track project to upgrade the St Christopher’s School site as the main campus, with Halls of Residence for 200 students from abroad, represents a £10 million investment.

The plan is to give the one-year-old Gibraltar national football team its own home ground and create a complex which can be used for other sports and events. Currently the squad has been playing its European qualifiers in Portugal. (No need to ask why they can’t play in Spain!)

“The Europa Point Stadium presents the perfect opportunity to create a magnificent, beautifully designed public space for everyone to enjoy – together with the chance to create a globally recognised symbol for Gibraltar,” reads a government mission statement.

However, many Gibraltarians have objected on environmental grounds to the loss of their last remaining open space. More than 1,500 people signed a petition calling on the government to reconsider the chosen site, fearing that a natural beauty spot will be lost forever. There’s also concern over match-day mayhem as thousands of fans pour over the frontier and sweep through to the other end of the territory like a flash flood.

As local Darren Olivero explained: “The design – hideous though it is – is not the issue; the location is. Europa Point and the views of and from it would be ruined forever by any such large structure.” 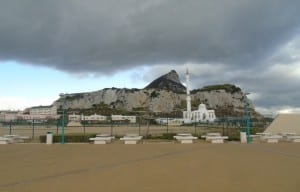 He has a point. Europa Point will certainly never again be the way it was for me; open, airy and beautiful, like standing at the edge of something truly special.

It would be a spectacular stadium, no doubt, although one that totally dominates the landscape. Still, there is no way I’m missing that first Gibraltar game at the new stadium.

Although I can’t help feeling that, in striving to be like the rest of Europe – flashy university, international football stadium – Gibraltar could be losing more than it gains.

Whatever your viewpoint, see the one at Europa Point before it changes forever.