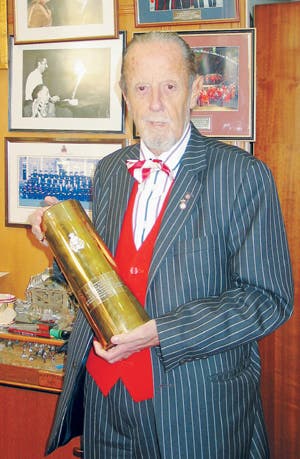 EVEN though he’s pushing 80, Gibraltarian estate agent Solomon Levy MBE still has to talk down his playboy image.

“I’m not all that bad, and I’m certainly not some perverted old man,” says the 77-year-old, who has become an institution on the Rock over the decades.

Looking dapper in a pinstripe suit and one of his signature bowties, Solomon – known locally as ‘Momy’ – celebrates an astonishing 55 years in business on April 1 – making him the longest-serving estate agent on the Rock.

“I feel very proud about that, because in 1713 in the Treaty of Utrecht it was stated no Jews or Moors will be allowed on the Rock,” he adds.

“But one of the proudest achievements of my life was being made the first civil mayor of my home town.”

Solomon was civil mayor between August 2008 and July 2009, following a family tradition and the political footsteps of his late uncle Sir Joshua Hassan, the first Chief Minister, who ruled for nearly two decades.

“If I had to choose between the knighthood or being mayor I would definitely choose being mayor,” says Solomon.

A great year for Serneholt Estate in Spain’s Andalucia

Tallulah Taylor - 7 Dec, 2021 @ 16:30
When Olive Press intern Tallulah Taylor arrived on the Costa del Sol in December she discovered she was entirely unprepared for winter in a house better designed to keep out the summer heat.