FRANCISCO Goya is one of the most influential Spanish artists of the 18th and 19th centuries. 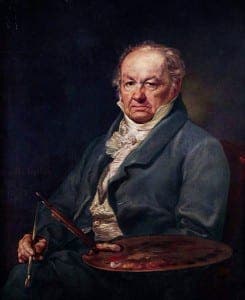 His works adorn the walls of world-famous museums – including Madrid’s Museo del Prado and London’s National Gallery – while his wide range of mediums variety of subject matter have made him a Spanish icon for the past 150 years.

And now, there is a growing fascination with Goya in pop-culture – not in painting or printmaking, but at the cinema.

Central to the plot is the mysterious whereabouts of Goya’s masterpiece, The Duchess of Wellington – rumoured to conceal the code to a lost Swiss bank account loaded with Nazi gold.

It opens with protagonist James McAvoy explaining how art auction houses have historically been targets for thieves, setting up the plot of the in-house theft of Goya’s The Witches in the Air.

Upstaging the film was an actual event that occurred just after its release. Sotheby’s – London’s auction house – hit headlines for selling not a Goya painting but a receipt for one: none other than The Witches in the Air. Dated Madrid 27 June, 1798 and written in Goya’s own hand, it sold for an amazing €41,000, largely due to the publicity from Trance.

But these aren’t the only big Hollywood names to exploit Goya’s iconic reputation. Steven Spielberg himself claimed that Goya was a ‘major influence on the visuals’ for the 1997 Oscar-nominated Amistad. Meanwhile director Steve McQueen drew heavily on Goya’s war images as a visual influence for 12 Years as a Slave, which won three Oscars last year. Indeed, thanks to his graphic first-hand depictions of the horrors of battle, art critics have long claimed Goya was the first true ‘war correspondent’.

Just this month, the 29th annual Goya Awards were presented in Madrid. Celebrating the best in Spanish films, they are considered the equivalent of the American Oscars. The organisers chose the name because they believed Goya is the man most representative of Spanish culture. High praise indeed!

But the growing fascination with Goya’s legacy is no accident. He is a pop-culture phenomenon because he explored themes that resonate with modernity.

A chairwoman at Christie’s London Art Auction said: “Goya has laid bare his powerful themes of blood, war and fear and juxtaposed his ability to simultaneously convey beauty, humor and human kindness. He is entirely revolutionary…. an artist of the moment.”