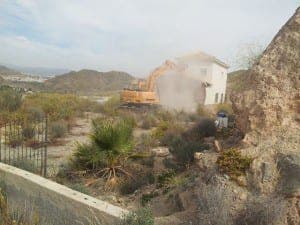 EXPATS conned into buying illegal homes in Spain are celebrating a change in law after a decade of campaigning.

Hundreds of heart-broken homeowners invested in Spanish properties before the crisis hit in 2008, only to find their dream homes were constructed illegally and could be demolished without any form of compensation.

But now, thanks to years of campaigning, a change in the law states that ‘homes will not be demolished until the owner receives a payout’.

‘It looks like a house, it is a house, but far as the authorities were concerned, it’s not a house,” said AUAN president Maura Hillen, who unknowingly bought an illegal house in Albox in 2007.

“We were left with paperless properties and we have been working to improve our circumstances over the years.”

AUAN is a group established by residents in Almanzora, where there are 12,697 illegal constructions alone.

It is unclear whether properties already demolished will receive any retrospective compensation.

According to AUAN, there are an estimated 300,000 illegally built homes in southern Spain.