In a sequence of dawn raids, Spanish police today seized eight people they suspect belong to a jihadist group. 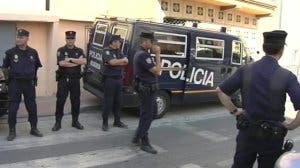 The arrests took place in Barcelona, Girona, Avila and Ciudad Real where those detained are said to have been planning domestic attacks and recruiting volunteers to head for Syria and Iraq.

Police have not released identities for the suspects.

This year alone has seen 21 arrests of Islamic radicals in Spain and follows two arrests who were ‘preparing for jihad’, just three days ago.