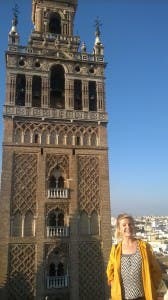 THE first day at Clic language school begins with an assessment of your level of Spanish, entirely for your own good of course but still a nerve-wracking experience – although I will be the first to admit that the headline for this is a bit dramatic.

It’s basically a very friendly exam where you write a little a bit about what happened to you yesterday, and what you’d like to learn about on the course. Afterwards you’re split into the classes that match your level so you can learn things that will be most useful to you.

In other news, Clic also offers a lot of cultural activities outside of the classroom, all of which take place in Spanish of course and are a great way of putting your listening abilities to the test.

One of these – which I couldn’t recommend more – is a trip to the Sevilla Cathedral, but with a twist. It gives you a rare chance to head up into the ‘cubiertas’ of the cathedral, which means the ridiculously high up passages and little secret staircases that adorn the cathedral, and means you get closer to the stained-glass windows than you ever imagined possible.

I had a minor mental crisis when we followed our guide outside and I realised we were actually on top of the cathedral, practically level with the top of the Giralda tower.

Also recommended is the cinema club, which meets every week to watch films, in Spanish with Spanish subtitles. This week’s offering was Grupo 7, by the director Alberto Rodriguez (whose most recent offering La Isla Minima swept the board at the Goyas this year, scooping 10 awards). It’s a pretty gritty police thriller set in Sevilla in the lead up to the 1992 Expo.

Back to Spanish, a phrase of the day:

sentirse atraido/a, or a similar phrase me atrae, or me atraen for plurals. Both meaning to feel an affinity for something, or feel attracted to something. You can also use it to say you’re attracted to a person.

As in, me siento atraida por la cultura de Espana.