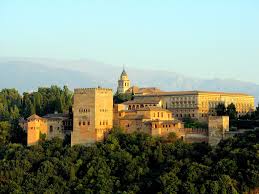 A VERY busy few days at Clic has almost knackered me, but I’m just about still standing.

I finally managed to return to Granada, to continue my internal debate about which of the two cities – Granada or Sevilla – is my favourite. For those interested, the latest visit has confirmed that although Granada has the better shopping (resembling Morocco in its quality of market-esque shops) Sevilla is the better city to call home. For me anyway.

As well as the shops, the school outing to Granada included a very well-informed expedition through the Alhambra – the most beautiful building, and one which I plan to continue revisiting throughout my life – and a stroll round the oldest barrio of Albaycin, which includes truly stunning views of the Alhambra.

Of course the weekend in Granada also meant taking advantage of the ‘free tapa with every drink’ deal that you find in around 99% of bars there, and admiring the incredible variety of stag and hen dos.

I still haven’t managed to work out why, but Granada is ridiculously popular with those about to get married, and you find an amazing range of costumed groups hitting the bars and clubs in the city.

But there’s also been plenty of time for Spanish, and the level of grammar has really ramped up this week. I think it’s because I’m now on my penultimate day, but my teacher seems to have decided to teach me everything we haven’t yet covered. Which is a lot. And which I’m incredibly grateful for. I couldn’t stop smiling in my lesson today, despite the incredible overload of grammar and brain-ache.

And finally, finally, I’ve managed to see some actual Flamenco. That may sound ridiculous, but despite more than a year in the country, I’ve never actually got round to tracking down a good place to see it.

But all it took was the threat of just five-and-a-half days left in Spain and a willing Italian tour guide – picked up in the park – to inspire me.

It was truly beautiful, and almost impossible to tear myself away. Particularly when the show moved next door to a much smaller space, with a piano. If anything, the heart-wrenching songs are even more so when played on the piano.

And if you come across it, the infamous Agua de Sevilla is worth a try too – a combination of pineapple juice, copious amounts of cointreau and whipped cream… Surprisingly delicious for those with a sweet tooth.

Phrase of the day: ‘Ponerse como una sopa’ – very useful for when you get stuck in a Sevilliano downpour and end up soaking wet. It’s been raining a lot this week…