THE disgraced owner of a Torremolinos animal sanctuary faces four years in prison for animal cruelty. 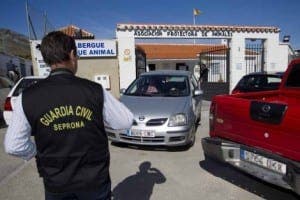 half times the number of animals in a 20-month period than is legally allowed.

A report from Seprona claimed a smaller dose of anaesthetic was used – apparently to save costs – which meant the animals suffered ‘slow and agonising’ deaths.

The animals were reportedly put down ‘without veterinary supervision and with the wrong drugs, leading to unnecessary and unjustifiable suffering’.

In some cases, cats and dogs were put in freezers when they were still alive.

Now the prosecution’s investigation into malpractice at the sanctuary states 2,200 animals were destroyed in three years.

It recommends Marin is jailed for animal cruelty, unauthorised practice and falsifying documents, as well as fined €7,200 and banned from working with animals.

One employee is also charged with animal cruelty and unauthorised practice.

In 2012 the Olive Press revealed the close relationship between Marin and Torremolinos Town Hall.

Court documents showed she made a series of unexplained payments totalling over €50,000 to Mayor Pedro Fernandez Montes’ brother Jose Fernandez.

They were made in a series of six ‘to the bearer’ cheque transactions between December 2005 and March 2006. All of them were cashed by the brother.

Marin is also accused of using the charity’s money for hotel stays, driving lessons and spa treatments as well as favours for friends and family.