NEXT weekend, some of the world’s top natural history experts will gather at Huerta Grande Eco-Resort for the El Estrecho Nature Fair. 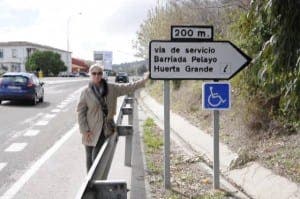 There will be lectures and workshops, whale and dolphin trips and front row seats at the greatest aerial show on earth: the annual spring bird migration.

Let’s hope no one has as much trouble finding the place as we did!

You’d think it would be easy to locate the entrance to Europe’s most southerly natural park – El Estrecho, 30 times the area of Gibraltar – and its neighbour, Los Alcornocales, the world’s largest cork forest, twice the size of Barcelona!

But if you blink you’ll miss the turn-off to Huerta Grande Visitors’ Centre on the Algeciras-to-Tarifa coast road, where you can get maps for hiking and biking trails. The signpost is illegible from a moving car, even when you’re looking for it. We overshot it three times!

When you finally figure it out (take a sharp right turn up a one-in-four gradient into Pelayo village, a sharp left turn into a tunnel under the coast road, then along a service road to a proper sign), you’ll be very glad you did.

I thought Arcadia only existed in classical paintings and Greek and Roman mythology. But if any place could be a model for that mythical pastoral paradise, it’s El Estrecho in springtime, tumbling down the cliffs like a natural Hanging Gardens of Babylon.

Butterflies, wild flowers and IMAX cinema views of wheeling kites and buzzards, projected against the blue screen of the sky, are added attractions at this time of year.

How odd to find Arcadia on the doorstep of Algeciras, said by some (but not me) to be the ugliest city in Europe.

Quirky Huerta Grande was once a summer holiday camp for military top brass, the park warden told us; and an open prison for General Milán del Bosch, one of the ringleaders in 1981’s failed coup against King Juan Carlos.

The warden showed us:

There’s a refuge for injured birds, an observatory with bird feeders, a rock-climbing wall, a cafe and a 3D mosaic model of the coastline, designed in the style of Gaudi.

El Estrecho and Los Alcornocales are part of the Mediterranean’s much bigger Transcontinental Biosphere Reserve, an area five times the size of Madrid. The parks lie at the crossroads between two continents and two seas – the Land’s End of Europe!

Have you seen how many signposts Land’s End has? Just one (decent-sized) sign for Huerta Grande wouldn’t go amiss…

Don’t miss the Estrecho Nature Fair, on from March 27-29 … if you can find it! Visit www.huertagrande.com for more info.