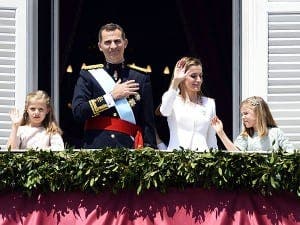 Extra security measures have now been taken to protect the royals.

The note was uncovered in police raids which lead to the arrest of eight members of an ISIS terrorist cell.

The note, written by the cell’s ringleader, read: ‘Felipe of Spain you will know what suffering is when your daughters are under the rubble’.

The written threat was found during raids conducted across Spain in Ciudad Real, Avila, Girona and in Barcelona.

All eight arrested are Spanish nationals, but five are of Moroccan backgrounds.