A PAINTING by Pablo Picasso could set a new record for the most expensive artwork ever sold at auction.

The Malaga-born artist’s ‘Women of Algiers’ is expected to fetch around €130 million when it goes under the hammer at Christie’s auction house in New York on May 11.

Painted in 1955 the masterpiece focusses on Picasso’s second wife Jacqueline Roque and was created as an homage to his friend and rival, Henri Matisse.

Experts are expecting the piece to smash the current record set by Francis Bacon’s ‘Three Studies of Lucian Freud’, which sold for €129 million in 2013.

“One can arguably say that this is the single most important painting by Picasso to remain in private hands,” said Olivier Camu, Christie’s deputy chairman of impressionist and modern art.

While Christie’s global president Jussi Pylkkanen added: “It has become clear that the many new global collectors chasing masterpieces have been waiting for an iconic Picasso to appear on the market.”

The ‘Women of Algiers’ last sold for €28 million in 1997, to an unknown buyer who is remaining anonymous.

In 2010, Christie’s sold Picasso’s ‘Nude, Green Leaves and Bust’ for €96 million, the highest price ever for a Picasso. 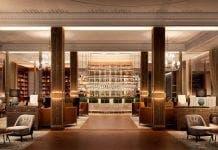