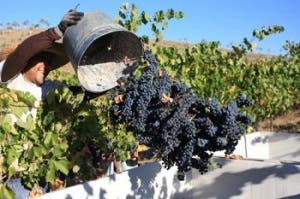 SPAIN has become the world’s biggest wine exporter, with bottles of ‘cheap plonk’ flying off the shelves.

Last year, a massive 22 million hectolitres of Spanish vino was exported, outstripping both France and Italy.

However, sales revenues were down 2.2% because of bulk sales with small margins, despite a 22% rise in the volume shipped out.

Surprisingly, France is now the biggest buyer of Spanish wines, importing and bottling – often as French wine – 5.8m hectolitres in 2014, 40% up on the previous year.