UNEMPLOYMENT in Spain fell by 63,200 in March, suggesting that the nation really is rising from the ashes of the crisis. 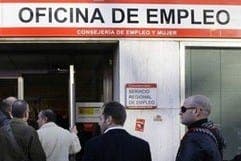 This makes it the highest single month reduction in joblessness since 2002 according to the seasonally adjusted statistics.

The Basque Country is the only region in Spain that has not seen its jobless rate fall, recording instead an increase of 510 unemployed over the year.

Spanish consumer confidence is improving and the economy looks to be in recovery mode.