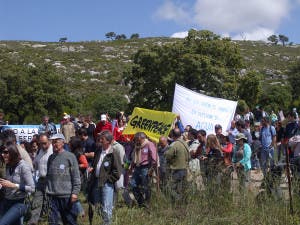 MAKE no mistake, the power of the press is still thankfully strong.

For 20 years the Los Merinos saga has rumbled on, political greed and corruption determined to destroy thousands of hectares of UNESCO-protected land near Ronda.

A golf course and residential complex planned to fatten the wallets of corrupt politicians and developers pitted against a united desire by locals to preserve Andalucia’s natural beauty.

But it was not until 2006, when the Olive Press launched a campaign against the development in our first ever issue, that the growing dissent found a proper voice.

Up till then – and to this day – the local media in Ronda have done nothing but support the project.

But we would not be cowed despite losing friends and even receiving threats.

Nearly a dozen front pages helped to spread the news around Andalucia and further afield – in particular to the UK press – that Los Merinos was unethical, unsustainable and immoral.

And now, the thousands who have stubbornly protested against Andalucia’s most controversial macro-project will be ecstatic.

That is the local villagers, ecologists and expats who dared to stand up be counted… and, above all, the local policemen, who received up to 20 denuncias against them for daring to do their jobs.

This is a hard-fought, long-overdue victory for them and proudly, above all, to the power of the press, which still has the ability to affect the change its readers desire.

Cristina Hodgson - 9 Aug, 2022 @ 12:15
A PARROT that had been stolen from Alhaurin last May, has been found and returned to his owners. Thanks to the bird’s frequent and insistent...