INTERNATIONAL tourists spent a total of €6,500 million in Spain during the first two months of the year. 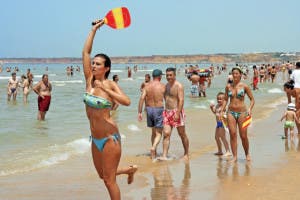 This represents an 8% increase on last year, with the average tourist also spending 3.4% more, up to €1,018. While the average daily tourist expenditure increased by 5.4% to €113.

Andalucia was the region with the greatest year-on-year increase, at 18%, followed by the Balearic islands (13.4%) and Madrid (13%).

Tourists from the United Kingdom were the biggest foreign spenders, with an increase of 10.6% from the first two months of 2014.

They spent over €1,100 million in total, with Germans second thanks to a €911 million spend and Italians third on €298 million.

The biggest increases in Spanish spending came from the United States and Belgium.