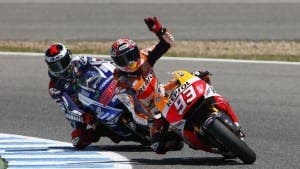 WITH the 2015 MotoGP season underway, Spain’s title challengers are hoping to kickstart their bid for glory on home turf.

The first European circuit of the season sees the world’s top two-wheelers descend on the Circuito de Jerez on May 3.

And with a trio of Italians claiming all the podium spots in the season opener in Qatar, the three Spanish amigos, Marc Marquez, Jorge Lorenzo and Dani Pedrosa, will be hoping to knock them off their perch.

The race in Jerez marks the start of what most riders describe as the most important part of the season.

With long distance travels out the way and any off-season cobwebs brushed off, the race in Jerez should reveal who the real title contenders are.