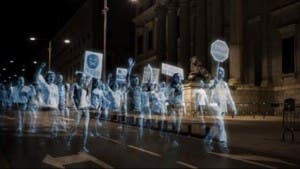 A FUTURIST digital protest was held by a group of Spanish activists this weekend.

In response to the country’s new social security law, nicknamed the ‘gag law’, thousands of virtual people joined in the world’s first ever hologram protest.

Beaming thousands of holograms on to the lower house of Spain’s parliament, this was just the latest stunt arranged by protest group No Somos Delito (We Are Not Crime).

The new law means some forms of protest, such as gathering in front of Parliament, will be deemed illegal.

Unauthorised photographs of police can also be punished by a fine of up to €30,000.

The new measures will go into effect July 1, if they pass national and European legal challenges.

Cristina Hodgson - 29 Sep, 2022 @ 09:15
THE famous Caves of Nerja (Cuevas de Nerja) are without doubt, a tourist emblem of the municipality and the entire province of Malaga and...