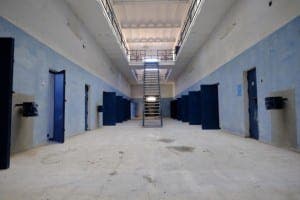 WHILE England opened the Tate Modern in a disused power station, Spain has begun converting its prisons.

So far four old clinks have been transformed into cultural attractions – and Malaga is next.

The conversion of the 14,000m2 Prision Provincial in the Cruz de Humilladero district of the city began in January, after almost six years of closure.

You can also see ‘art in the can’ at Vigo’s Museo de Arte Contemporaneo, the DA2 of Salamanca, the Museo Extremeno in Badajoz, and Segovia’s La Carcel: Centro de Creacion.

Renovators tend to keep the original structure of the prisons and take advantage of the open spaces, as Vigo did, hosting the Jazz Festival in 2015.

But the prison/painting combination is not altogether new.