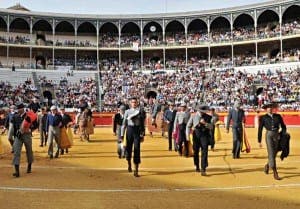 THE corrida de toros in Granada last Sunday was an intense, emotional experience – one which left me feeling totally stirred up for hours afterwards and well into the next day.

Its highlight was El Cordobes’ performance with the 3rd bull (in a corrida, three matadors kills two bulls each). This is not a blog on the corrida’s structure, but very briefly: each matador’s performance is divided up into three acts, the last of which is called the faena. This final act lasts around ten minutes and reaches its climax with the death of the bull.

It is during the faena that the matador is meant to create as much emotion and drama as he can, by drawing the bull ever closer to him via interlinked series of passes that demonstrate both his artistry and skill, and the strength and bravery of the bull. If a great faena concludes with a good kill  – that is to say, with a single sword thrust delivered over the top of the bull’s lowered horns, resulting in almost instantaneous death – it can be intensely moving, in a way that bears comparison to no other art or spectacle (or barbaric relic that should be abolished: call it what you will). It is hard to describe the emotions that a good feana stirs up – and El Cordobes delivered one hell of a faena last Sunday. As I walked away from the arena that evening, I felt both saddened and elated by what I am about to describe.

He chose to perform his faena on the side of the ring I was sitting on, feet away from the barrier – perhaps because friends or family were also on that side. I was, therefore, metres away from the action. At the beginning of the faena, El Cordobes worked the bull away from the centre over to the barrier, gesturing to it to follow him. This bull still had plenty of spirit left and charged the muleta with great vigour every time it was asked to. Once he had the animal where he wanted it, El Cordobes really started performing. I could hear him talking to the bull throughout his mesmerising faena, coaxing it into and through his beautifully flowing passes with cries of ‘Toro!’.

He used this single word in a variety of different ways, as if to express encouragement or provocation one moment, and praise the next. The crowd saw and felt that something special was happening, and El Cordobes knew it: now in total control of the bull, he would bring it to a halt after a series of passes and passionately gesture to the stands for encouragement, which he received in the form of deafening yells of ‘Torero, torero!’ and almost constant applause. The band was playing now, adding to the emotion and the drama: El Cordobes brought the bull so close to him that you could see the blood on his costume. Clouds of sand rose up from the arena floor during series of passes that were audacious and flashy, while others were quietly eloquent, almost intimate. The drama and the emotion steadily increased, accompanied by the music and the roars of the crowd, many now on their feet, as he brought this brutal, beautiful dance ever closer to its conclusion.

Once he’d got the bull in position, El Cordobes brought the sword up to head-height and aimed along its length for a point in the bull’s shoulders about the size of a 50 pence piece. The raucous and anarchic crowd, who had been whipped into ecstasy by the faena, suddenly went silent. Hisses of ‘Sssshh!’ went around the stands: this moment is both vitally important and potentially lethal for the matador.

In seconds, it was all over: Cordobes gave the cape a sharp twitch, the bull charged for the final time and, with an audible slap, the sword was slammed in up to its hilt between the animal’s shoulders. The stunned animal was now dead on its feet and the crowd lost control completely, flailing white hankerchiefs to show they thought a triumph had occurred. I looked on, speechless, as El Cordobes took a lap of honour around the ring, holding aloft his bloody trophies: the bull’s two ears, cut off to mark his great success that evening in Granada’s imperious Plaza de Toros.