A TURTLE named Madonna which miraculously survived a massive oil slick off the Canary Islands has been successfully returned to the ocean after intensive rehab. 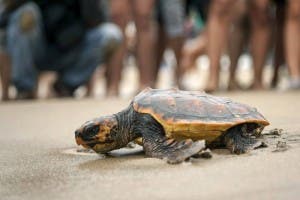 Named after the rock goddess due to the speed at which she shot to fame, the endangered Loggerhead was the first animal rescued after a Russian fishing boat sank.

Caked in oil inside and out – toxic substances reached her throat – the creature was incredibly lucky to survive. Now, like a prayer being answered, she will live to ‘die another day’.

Scientists were confident she would survive back in her natural habitat, once she had chomped down her first meal of three sardines without problem.

Floating debris, particularly petrol, is a huge danger for turtles and the Canaries are not exactly La Isla Bonita; 80 of the 150 studied by Gran Canaria marine biologists showed traces of pollution.