THE first person to emerge from London’s Apple store with the new Apple Watch was a Spaniard. 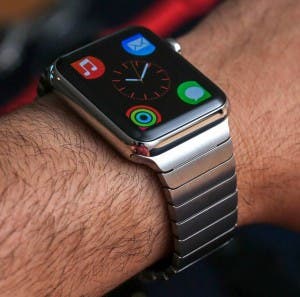 The man, Josep, conveniently timed a mini-break to London with his girlfriend to coincide with the latest Apple gadget launch.

Although he claims the timing of the trip was ‘a coincidence’ his girlfriend didn’t seem so convinced.

Clearly overcome with joy, Josep posed with his watch for photographers outside the Dover Street store.

The watch went on sale on April 24 and a long queue quickly formed despite Apple urging people to call the reservation line before coming to the store.